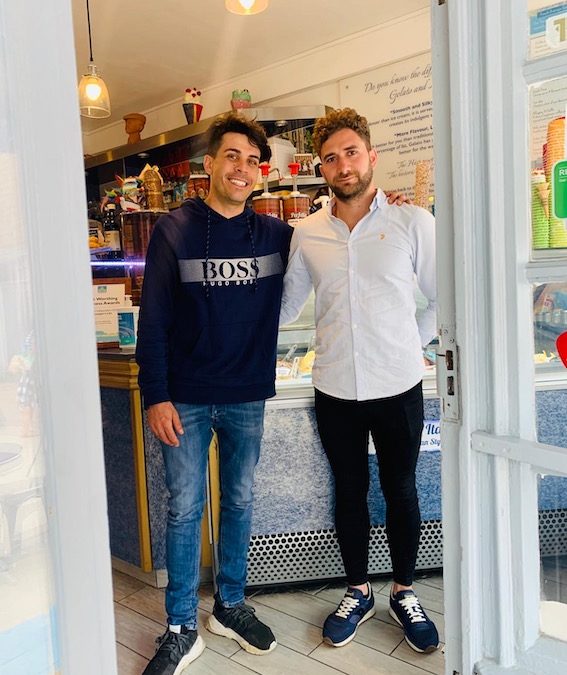 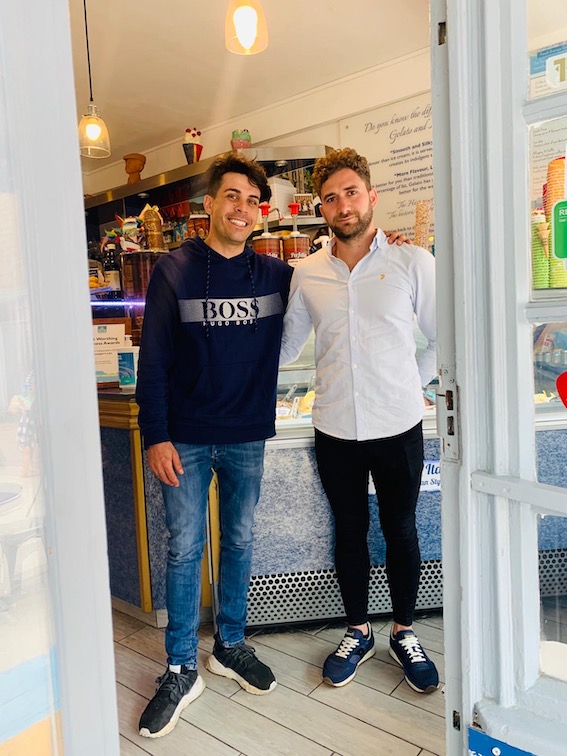 Sicilians Saverio Mela and Fabrizio Valastro own one of Worthing’s most top-rated eating establishments, Giuseppe’s Lite, and it’s no wonder that with their passion and determination it’s gone from strength to strength over the five years they have been in business.

Sav and Fabrizio are business partners originally based in Brighton when they thought of a brand-new concept to introduce to the UK market. This concept was to create an actual Sicilian bar in the heart of a community; however not the kind that us Brits would think of when it comes to a bar. A Sicilian bar is a place where friends and neighbours gather together to drink good coffee, chat, laugh, discuss business or to have an aperitivo whilst the kids get gelato on their faces.  It’s an environment which serves high quality, fantastic, quick, simple food and drink with rich intense flavours that burst on to your palate.

Their idea was to reproduce the experience of Artisan Sicilian Gelato and Sicilian Street food and provide a real taste into Sicilian culture for the local population. This initial idea was to start with gelato, coffee and breakfast and the focus was to find a well-located premise in the local region.

Although both Sav and Fabrizio lived in Brighton at the time, Worthing showed so much more promise with its tight-knit community and family-centred environment.  During their research, Sav and Fabrizio came in contact with the owners of Giuseppe’s Southern Italian Restaurant in Warwick Street and decided to go into partnership with Giuseppe to bring their new venture to life.

Giuseppe’s was to remain as a ‘sit down’ restaurant and Giuseppe’s Lite was to become the more informal café/bar from their ideal concept. Although next door to each other, they remained two different premises. The partnership in 2015 and continued for another few years until Giuseppe’s Lite was ready to fly solo.

Sav and Fabrizio’s idea was to initially focus on the one shop and to establish themselves within the local community, providing the highest quality food with outstanding customer service. This focus has worked well for them as there are not many people in the local area who haven’t heard of either person or the bar!

The menu contains a wide range of homemade, mouth-watering delights from their sumptuous burgers to light, freshly prepared pizzas and delicious range of sweet pastries, gelato and cakes.  As soon as you take a look at the menu you will want to taste absolutely everything. Every dish is made with a deep love of food, family and community, and you can taste this in every bite. The staff take ‘fresh’ so seriously even the buns for their burgers and the pizza dough are made daily in-store.

In the early years, Giuseppe’s Lite invested in a catering trailer which they still use to bring good, delicious ‘honest to goodness’ Sicilian food to private functions and local events in and around Sussex, cementing their name not only in Worthing but further afield too.

Before lockdown, the business was experiencing tremendous success and growth and like many businesses in the catering and hospitality industry, COVID-19 was a severe blow.  Plans were already underway in Brighton to open their second store, Bedda and everything had to grind to a halt whilst they waited, like everyone else, to see how damaging the impact would be to their livelihood.  When the Government announced the country-wide lockdown a difficult decision was made to place a hold on the opening of Bedda and to focus on supporting the wonderful Worthing community who had supported them since opening.

Both Sav and Fabrizio shifted their focus to keeping the Worthing shop open in order to benefit the local community who had loyally and lovingly supported them since they opened. They began by stocking the most essential items that were difficult to get hold of in supermarkets and ensured their stock levels were adequate to meet the demand.  They used their lucrative position on social media to market to their existing audience, and advise their customers of what they had on offer.  They started with essentials like flour, eggs, cheese, bacon, fresh fruit and vegetables whilst the hot food was put on hold for a couple of weeks.  Customers responded extremely well to the service the establishment was providing and started to buy these necessary groceries from Giuseppe’s Lite, rather than chancing their luck at local supermarkets.

As Sicilian bars are primarily a seasonal business, mostly running from April through to September, the situation could have been a disaster for the owners if they hadn’t thought on their feet and acted quickly to make brilliant decisions to adapt their whole concept and business in the short term, whilst also assisting the local community. More advertising was completed on social media and the reviews of the takeaway food brought warmth to the hearts of the team, prompting them to keep going through the crisis.

Pivoting their business in the way they did at the time they did was a very bold but successful move for Sav and Fabrizio, and as a business, there is much to learn from their decision to do so.

Bedda is due to open in July 2020 and we’re sure those in Brighton will take to it as well as the locals in Worthing have taken to Giuseppe’s Lite.

Giuseppe’s Lite now has a fantastic menu available on their website and you’re able to order their hot food, gelato and essentials from the website or their brilliant new app available to download from their website.

You can also email them here: info@giuseppeslite.com